Shankar
i am what i am and that whats i am

Usually I avoid my personal stuff in my blog. But the time around I have made an exception. (I have a tendency to make a lot of exceptions though). Rummaging through files at my father's office, I came across these archival business correspondence. Apparently my grandfather's father Vembu Iyer wanted to start the sole franchise for Godrej Boyce Mfg Co in 1943. He had never met a single representative from the company( it was and still is based in Bombay then). His only previous experience with Godrej was the fact that he had bought an almirah in 1938 !! It is interesting see how people proposed business ventures based on a mere purchase of a company good. Eventually my great grandpa did get the franchise and the business is still thankfully running even today. I am what I am because of this business. Vembu may have passed away but his solid legacy still looms large on all his descendants !!!
(just click on the image for an enlarged view to read) 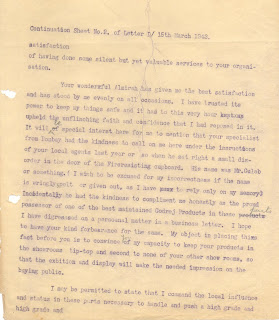 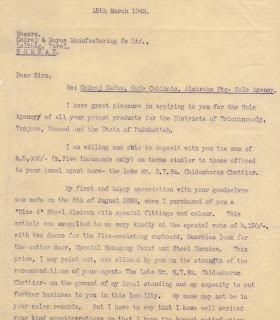 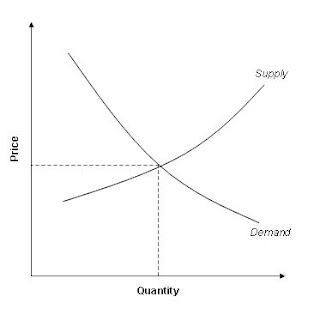 Now that it is my vacation, I have a lot of time to kill. So here goes another of my dumb blog. Only that this one is slightly academic or rather economics in nature. It is said that even a parrot could become a economist if only it could say two words: supply & demand !!!

The Tamil Nadu Engineering Admissions 2009 has drawn to a close. The number of vacant seats 30,550 !!! unbelievable isn't ? Out of the 1.14 lac seats that was up in the offing only around 83,500 was filled up. If this being the case for Government quota, I am pretty sure most of the management quota in self-financing quota would be unfilled.

So what explains this paradox? There are few case studies wherein supply exceeds the demand. The engineering education is one such among them. (there are also other examples like the civil aviation sector where currently the supply exceeds the air traffic demand, India's refining capacity is also greater than the current crude oil demand, making India a net exporter of refined petroleum products !!). So in all these case we have seen that it supply exceeds the demand it seriously sucks for the suppliers. For the consumers of course it is a bonanza time as cut throat competition ensures that the costs are un-sustainably cheap.

One may wonder if both the number of seats available and number filled are a single point in the graph, why bother to draw to a curve? This is because of the concept of Willingness to Pay.
A more affluent student wouldn't mind paying Rs 62,500 per year (max management quota fees) provided he gets the good he wanted (i.e an engineering seat). So students like him would be on the upper reaches of the demand curve. Whereas a student from a poor family would find it difficult even to pay Rs 40,000 (govt quota fees). such students are bound to be in the lower reaches of the curve. (below the intersection in some cases). Likewise colleges could offer more seats than the current dispensation by increasing the strength or the number of courses. But they would be reluctant to do , if the intersection of demand curve is below their current intake capacity. (for the colleges the willingness to supply is the equivalent concept of WTP).

In this crowded market who is going to suffer? Economics tells us it is going to be the supplier i.e. technical institutions. As the number of colleges proliferate the students have more and more choices. In view of the increasing vacancies, the colleges are forced to reduce their fees (as teh demand curve falls down while supply remains constant). (the other day my cousin showed me an SMS ad for an engineering college seat with reduced fees !!! such is the pathetic state of engineering colleges !!!). As the tution fees falls , colleges cannot recoup the cost incurred in imparting the education.

This is where economics and practicalities differ. As the cost of educations falls it is teh students who are going to be affected as the result quality deterioration. So in a way both the colleges and the students are going to suffer if this current trend continues unabated.

AICTE must step up it reguations in this regard. In this competitive world we cannot afford to churn our second rate engineers. I did visit the AICTE guidelines on the starting new techincal institions. Officially all it is takes is a etsablished trust/society, with 25 acres land and 35 lacs Fixed deposit guarantee !!! Unofficially of course it involves greasing several palms in the State government, affiliating university and AICTE members. ( AICTE Chairman is under arrest by CBI on bribery charges ). So even if that is taken into account it takes only about 1 crore plus the land acquisition cost to start an engineering college !!! You can even start the building construction after getting the initial LoA. With relatively non-existent market barriers it is easy for every Tom, Dick and Harry to start a college. After all these individuals must park their black money somewhere, so why not start a college??

Too many cooks spoil the broth. The saying seems apt for TN engineering colleges. (I personally wish they could start some of these colleges in the North-east or Bihar/Jharkand/Orissa etc. where even colleges are non-existent). In 2009-10 academic year 85 new institutions cropped in TN alone !!! Perhaps they are yet to learn the simple lessons of supply v. demand !!!
Posted by Shankar at 8:25 PM 1 comment:

Gender Equality- in letter and titles !!!

The other day when I was watching the Lok Sabha TV ( for those of you who have never heard about it, there is also a Rajya Sabha TV channel. Both are meant exclusively for broadcasting the respective house proceedings. Both are very informative on public policy issues), one Honourable member addressed the Speaker Meira Kumari as "Madam Speaker Sir". Well he may be excused for his faux pas, but many of our everyday parlance is riddled with a hidden gender bias. Most of our societies (including that of the West) have been male centric for centuries, so it is only in recent times that gender equality is being given its due regard.

For example we award "Bachelor's" degree even to our lady graduates, when a more politically correct designation would be "Bachelorette's". Our "Madam President" may not find a suitable Hindi equivalent as Rastrapathi is traditionally been occupied by pathis. (pathi meaning a husband). Perhaps she could be addressed as "Rastrapatni". Well I am sure Idea Cellular would appreciate this. After all, "What an idea Sirji !!"
Posted by Shankar at 8:53 PM 1 comment:

A trial by a Jury or a Judge?

In Salman Rushdie's Midnight Children there is a whole chapter dedicated to the scandal of Commander Sabarmati. The commander's wife Lila was involved in a romantic affair with one Homi Catrack, an unscrupulous womanizer. So when our hero Saleem breaks the news of the affairs to the chivalrous Commander , he devices an elaborate act to catch the couple red handed.

So this sounds like a good hindi movie plot? But unfortunately the events described above are based on real life. In our real story however there are some subtle changes that the Commander is a young Parsi gentleman who could have easily risen to teh top ranks of the Navy. His wife was a British national in India. The villan of course is Prem Ahuja a Sindhi business man. Commander Kawas M Nanavati did murder his British wife Slyvia 's paramour Prem Ahuja at point blank range after both of them were caught red handed.

So why are we so much bothered about a scandal of the Bombay of the sixties ? Exactly fifty years ago this case transformed the way our judicial system work. This was the case wherein the Bombay High Court declared that trial by jury is not suitable for Indian setting. At the trial court the jury overwhelmingly influenced by the stature of Commander's 'chivalrous action' ruled 8-1 not guilty of premeditated murder. Instead charged him culpable homicide with a two year prison term.

Fifty years later, it is time we revisit the issue of trial by jury again. A jury is a representative sample of the society at large. In all criminal proceedings the accused has the inherent right to be adjudicated by the society for his crimes. In the current dispensation it is the individual justices who adjudicate and decided on the extent of guilt.An unbiased jury is a rough representation of society's collective values and conscience. Hence they are less vulnerable to personal prejudices and inclinations of individuals. Also trial by jury can also reduce the burden on over worked judges.

But trial by jury also has its own disadvantages. In the US there are frequent appeals on the composition of the jury. In the Rodney King case, an all-white jury exonerated the LAPD of any wrong doing in death of the black individual. In this case the collective integrity of the jury was called into question.

There are inherent disadvantages in judges deciding on the quantum of punishment as well. In a recent case of a murder of a person, by henchmen of the owner a popular South Indian restaurant chain, the trial court judge passed a 10 year RI imprisonment with a whopping compensation of 55 lacs to the victim's wife!!! (considering his restaurant empire across the world, he could have paid the fine with ease). Then the a two judge bench of the Madras High court stepped in and reduced the fine to Rs. 30,000 (from 55 lacs !!) with a double life imprisonment( two 14 years RI each). So in the trial court the judge saw the practical ameliorative measure as cash compensation with min imprisonment. (considering his age and political clout). But the High court judge strictly by the books and awarded prison terms accordingly. (unfortunately the prescribed monetary fines in our law books is yet to catch up with current rate of inflation !!!). Now that the lady would get a pittance for her struggles, the case went to the Supreme Court and the owner is on bail . (well that's the way our judiciary works)

Before I conclude, Kawas Nanvati was eventually pardoned by then Governor of Bombay in 1962, thanks to pressure exerted by the Parsi club. He eventually left India and settled in Canada. (with his wife Sylvia and family ironically !!))
Posted by Shankar at 7:48 PM 2 comments: